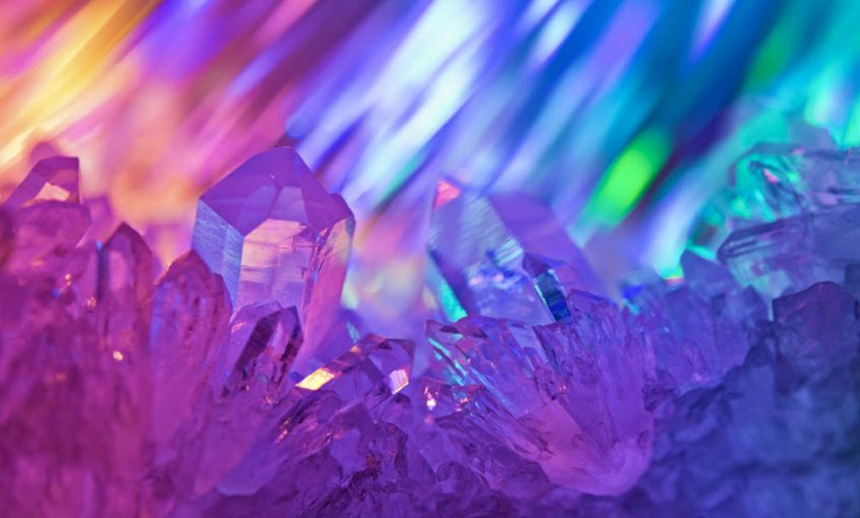 Crystals were created as the earth formed, they have continued to change in shape and character, as our planet earth has changed.  Crystals are in fact the earth’s DNA, a chemical imprint for evolution.  They are miniature store houses containing the records of the development of the earth over millions of years, showing the permanent memory of the powerful forces that shaped it.  Some have been subjected to enormous pressure, others grew in chambers deep underground, some were laid down in layers, others dripped into being – all of which affects their properties and the way they function.  Whatever form they take, their crystalline structure can absorb, conserve, focus and emit energy, especially on the electromagnetic waveband.

The earth began as a whirling cloud of gas, which created a dust bowl, this contracted into a white-hot, molten ball.  Gradually over eons, a thin layer of this molten material, magma, cooled into a crust forming – The Earth’s MANTLE.  The earth’s Crust is as thick as the skin on an apple, inside that crust, the hot, mineral rich, molten magma continues to boil and bubble and new crystals form.  See chart below.

In ancient times, healers used crystals as first aid remedies to heal and bring balance.  Sometimes powder from certain crystals was used to heal wounds.  Some Crystals contain minerals that are known for therapeutic properties, copper for instance reduces swelling and inflammation. Ancient healers were able to sedate or stimulate organs with crystals that contain both a positive and negative charge such as Magnetite.

Our Pets can benefit from Crystals also as listed in this chart.

The following is a list of Crystal correspondences to our Organs, also an Anatomy chart so you can see the relative organs in relation to our chakra system.  Balancing your chakras at the same time as your Reiki session, and placing a corresponding Crystal over the organ of concern, can greatly help with your healing.

Crystals that are used in modern medical equipment are called Piezoelectric, which means that electricity, and sometimes light, is produced by compression.  This property is harnessed in ultrasound machines, which use a piezoelectric crystal to produce a sound wave.  Sound is now being applied at the leading edge of surgery.  A tightly focused beam of ultrasound can cauterize wounds deep within the body and blast tumors apart without the need for invasive procedures.  Shamans and crystal healers of old were familiar with this ability of crystals to focus sound and light vibrations into a concentrated ray, which was then applied for healing.  Rotating a crystal wand on the skin causes compression, which releases a focused beam to the organ beneath.Crystals heal holistically.  That is to say they work on the physical, mental, emotional and spiritual levels to heal body, mind and spirit.

This is why they are particularly helpful when used in a combination with your Reiki treatment, and have your Reiki practitioner recommend one best for you to take home.
The Crystal Bible series written by Judy Hall contain a dictionary of Crystals, their properties and uses.

CLEANSING/CARING FOR YOUR CRYSTALS

Many Crystals are fragile and/or will crumble (friable), crystals that are layered or clustered can separate.  Polished surfaces on a crystal or natural points can easily get scratched or chip, these stones should be kept separate. Tumbled stones are more durable and best for making remedies and elixirs with, Crystals such as Selenite are water soluble.

It is best to keep your Crystals either separate or together in a velvet bag.   Clean your Crystals after you buy or are given them, before using, and also after using, as a Crystal can hold a negative vibration and be passed on to you.  THE SAME GOES FOR ANY JEWELRY! There are some Crystals that never need cleansing, Citrine, Kyanite, and Azeztulite are self cleansing.  Some Crystals cleanse other Crystals and are especially helpful to keep with your Raw, fragile stones that may damage or crumble, such as Clear Quartz and Carnelian, but they will also need cleansing after sitting with your other Crystals for a while.

The easiest way to cleanse your Crystal is by using a Crystal cleansing solution, either by placing a drop or 2 on your crystal or misting it with water that has had the solution added to it.

Crystals that are not friable or jointed can be held under running water or immersed in the sea or in sea salt.  As you do so, hold the intention that all negativity will be washed away and the Crystal re-energized.

Placing the Crystal in the light of the Moon or the Sun for a few hours can also recharge its batteries provided it is not a stone that fades in sunlight. Friable Crystals or clusters can be left in sea or rock salt overnight. Gently brush every speck of salt off afterward as they could damage the Crystal, especially in a damp environment.

You can keep a piece of Carnelian in a bag of tumbled stones, and you will never need to cleanse them using any other method.

A small Crystal can be placed on a clear quartz crystal overnight for cleansing, make sure to cleanse the quartz after as well.
You can smudge crystals or pass them thru the light of a candle for cleansing. You can visualize them surrounded by light, which will purify and re-energize them.

Crystals have powerful vibrations, because of this, it is easy to transfer those vibrations to water to make your own Elixirs or Essences which can be taken internally – unless the stone is toxic.  Do your homework on the Crystal before making your potion!  You can also apply to the skin or add to your bath water.  Some remedies, such as Black Tourmaline(Provides psychic protection and screens from electromagnetic smog, relieves jet lag, releases toxic energy from emotions, mind and body) can be put into a spray bottle (glass only) and sprayed into a room.

HOW TO MAKE A GEM ELIXIR – MOTHER TINCTURE

-take a glass bowl, fill ¾ full with natural spring or reverse osmosis water
– place a cleansed crystal that cannot crumble (tumbled gems are best) into the bowl
-stand the bowl in sunlight for 12 hours
-remove the crystal and bottle the mother tincture in a glass bottle with an airtight stopper
-if you are planning on keeping this tincture for more than 1 week, add 50% Brandy or Vodka as a preservative.  Store in a cool dark place.

TO MAKE A DOSAGE BOTTLE

-take a glass dropper bottle, fill with 1/3 Brandy and 2/3 spring or R.O water
-add 7 drops of the Mother Tincture. (This is for taking internally or putting on the skin.)
Take 7 drops 3 X per day.

***CRYSTALS, JEWELRY AND CLEANING SOLUTIONS ARE AVAILABLE FOR PURCHASE.